Cinnamon is the #1 most popular, of herbs and medicinal spices, in the world in terms of protective antioxidant levels. In the West, this sweet spice often makes an appearance during the holiday season, adding warmth to our baked goods and spiced lattes. Slowly but steadily, it is available year-round at coffee shops to sprinkle on top our coffee and tea. 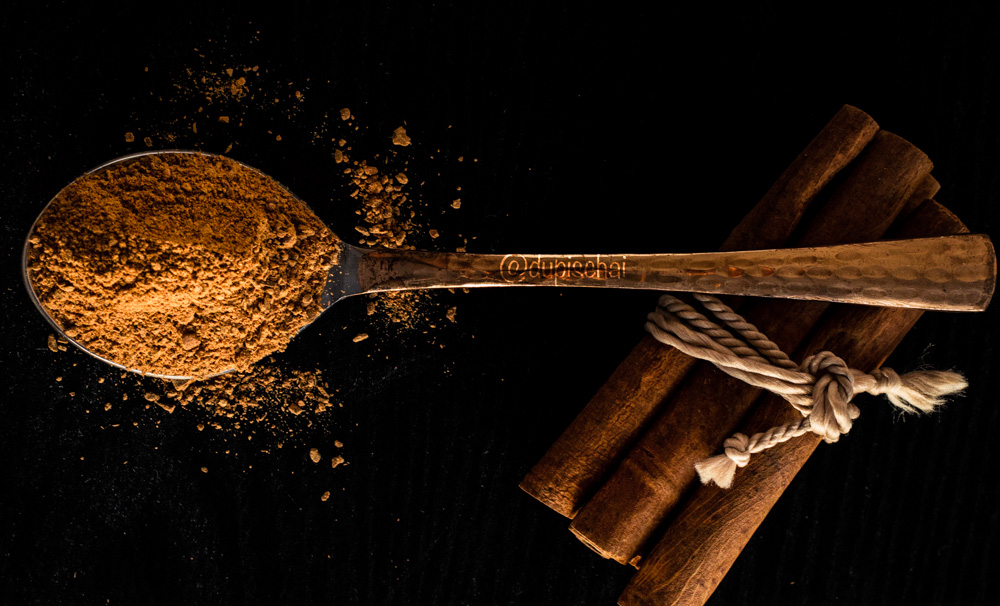 Cinnamon is quite possibly one of the oldest spices used to heal various conditions for thousands of years. Its origins trace back over 2,000 B.C to ancient Egypt. This reddish-brown spice also has been numerously mentioned in the Bible as a healing agent. Natural medicine records of ancient China dating back 2,700 B.C. reference cinnamon for its ability to fight illness.

With the passing of time, tradition and benefits of cinnamon continue to be shared through generations. Today, science has been and continues to extensively study this unique food product, backing up and identifying new medical claims of cinnamon.

Cinnamon comes from the tree bark of a Cinnamomum tree, which has over 250 species and is grown all over the world. It is made by removing the inner bark from the tree stems cutting them into small strips. When strips are dried, they curl into rolls, also known as cinnamon sticks. Today, cinnamon is available in almost every supermarket or specialty food store and comes in either ground powder, dried up bark sticks, or concentrated oil extract.

Cinnamon gets its unique aroma and flavour from a compound called cinnamaldehyde found in its essential oils. This essential oil is also behind majority of cinnamon’s health benefits.

There are two main types of cinnamon widely sold today:

Cassia cinnamon is commonly available in majority of grocery stores and at an economical cost than Ceylon. Cassia type also contains significant amount of coumarin, a chemical compound that is believed to be toxic to liver in large doses. Ceylon cinnamon contains much lower concentrations of coumarin. However, coumarin is not all bad news. Discovered in 1820, it is naturally part of many different plants and is used by pharmaceutical industry to make anticoagulants. Therefore, both types of cinnamon have significant health benefits.

Dosage and Consumption – for cassia cinnamon, one to two teaspoons daily is more than enough to reap all of health benefits, while keeping coumarin intake to a minimum. For ceylon variety, the intake can be higher. But keep in mind that with spices, little goes a long way.

Due to daily wear and tear, as well as many other physiological and environmental factors the body naturally produces free radicals. These free radicals cause damage to our internal molecules (DNA), compounds and cells leading to oxidative stress. Antioxidants can react with these free radicals and neutralize their effect or help repair the cell damage by other mechanisms.

Cinnamon is a powerhouse in terms of bioactive compounds and ranks #16 on the ORAC Scale for antioxidant value amongst all of the foods and beverages across the world. [1] Bioactive compounds within cinnamon including polyphenols, phenolic acids and flavonoids. [2,3]

A research study into antioxidant potency compared 26 various spices and shows cinnamon to have the highest antioxidant concentrations than other powerful superfoods such as garlic, thyme, rosemary and oregano. [4]

Inflammation is an important process for the body’s immune system. When the immune system detects a foreign agent (infection) or damaged tissue, the body creates inflammation of the affected area destroying the invaders and repairing the damage. However, modern day environmental factors contribute to overall oxidative stress producing continuous or chronic inflammatory response by the immune system throughout the body.

Active compounds within cinnamon have been shown to reduce blood pressure and total cholesterol, by lowering LDL (“bad”) cholesterol and triglycerides, while maintaining stable levels of HDL (“good”) cholesterol. [2,12]

Another study concluded that small cinnamon doses of 120 milligrams per day, not only decreased overall cholesterol, but also improved overall ratio by increasing HDL cholesterol. [13]

With Alzheimer’s disease, scientists have identified several neurotoxic proteins that begin to build up in the brain leading to neurodegeneration and dementia. Compounds found in cinnamon activate a vast and complex biochemical pathway which reduces buildup of these neurotoxic proteins while improving overall cognition and performance. [15,16,17]

Sugar is an important energy molecule that is used by the body and especially the brain. Insulin is one of the key metabolic hormones that actively regulates blood sugar levels. High sugar concentrations, triggers insulin release which rushes sugar out of the bloodstream and into cells for use and storage. Constant high blood sugar leads to chronic stress and overexertion of the pancreas and effect of insulin. This leads to lack of sensitivity to insulin or insulin resistance; and is a gateway condition to other more serious diseases such as metabolic syndrome and type 2 diabetes.

Polyphenols are one of the key antioxidants containing anti-inflammatory properties found in cinnamon. Along with chromium (also in cinnamon), these active compound have been shown to improve insulin sensitivity, lower blood sugar and blood pressure levels in both human and animal groups. Cinnamon was also tested on patients with type 2 diabetes and metabolic syndrome showing same positive sugar tolerance and insulin sensitivity benefits. [18] The anti-inflammation power of cinnamon affects numerous organs including the brain, improving brain insulin signalling and neuroprotective pathways seen in Alzheimer-associated changes. [19]

Metabolic syndrome and diabetes are both prominent and serious diseases, and the leading causes of morbidity and mortality worldwide. Both diseases stem from body’s inability to manage sugar/carbohydrate metabolism. This includes the breakdown of sugars, absorption into the blood stream and efficient delivery of this energy into cells.

Having numerous bioactive compounds, cinnamon affects several mechanisms within carbohydrate metabolism by lowering blood sugar levels and improving insulin sensitivity.  Studies show that cinnamon slows down the breakdown of sugars during digestion by inhibiting sugar metabolizing enzymes such as intestinal maltase (which breaks apart larger sugars (maltose) into smaller ones (glucose)). [20,21] This decreases the overall amount of sugar (glucose) that enters the bloodstream after a meal. Also, another active compound (cinnamtannin B1) mimics insulin, releasing less of the actual hormone while shuttling sugar into cells. This process is slower overall, but improves the glucose transport with lower insulin levels. [22,23,24]

Cancer is a complicated and serious disease where body’s cells begin to grow through uncontrolled division. Inflammation has been identified as one of the factors in disease inducement. Due to its powerful antioxidant and anti-inflammatory properties, cinnamon has been studied for possible treatment and prevention strategies.

Majority of studies have been done in test tubes (in vitro) and animal models (in vivo), but show promise of cinnamon’s protective effect against various cancers. Scientific research notes some of the active compounds in cinnamon appear to be toxic to cancer cells, while decreasing formation of blood vessels within tumors. Studies show one of the compounds of cinnamon’s essential oil (cinnamaldehyde) inhibiting tumor growth leading to cell death. [29,30,31,32]  Also, experiments on mice and test tube kind with cinnamon show an antioxidant response by activating detoxifying enzymes in the colon, and protecting against further cancerous growth. [33,34,35]

Throughout history, cinnamon was used by many cultures to naturally help fight various infections and diseases. Today, science continues to confirm numerous protective properties of cinnamon. Cinnamon’s essential oils contain many of the immune-boosting ingredients that have been identified to protect the body and defend it from various invaders. Cinnamon oil has been shown as an effective treatment against fungi causing respiratory tract infections. [36] Furthermore, these anti-inflammatory compounds are also anti-microbial, antibiotic, anti-fungal and anti-viral agents.

As mentioned before, cinnamaldehyde is one of the main active compounds in cinnamon which has been a key focus in cancer treatment research. As with tumour cells, cinnamaldehyde has been shown to slow down growth of several types of bacteria which cause problems in the digestive tract. [37,38]

Cinnamon oil extract has also been shown to protect against bacteria inside the mouth that can cause bad breath and tooth decay. [39] In addition, cinnamon is used as natural flavouring in chewing gum, to fight oral bacteria and prevent other oral or dental problems. [40]

Cinnamon was also investigated against viral infections. Human immunodeficiency virus (HIV) is an organism that attacks the immune system which can become weak and ineffective against any infection. Test tube experiments showed substantial promise of cinnamon’s active ingredients against HIV-1 (most common strain human viral strain). [41,42]

Due to cinnamon’s immense anti-inflamatory properties, its benefits also help with common seasonal allergy symptoms. This has been experimented on small animals where cinnamon was shown as an aid in lowering histamine response through overall inflammation reduction. [43,44]

Cinnamon is one of the most healthiest spices known to man. Cinnamon tree produces a product which has impressive health benefits within our bodies, with potential for more. Cinnamon also tastes great, and goes well with numerous dishes and beverages.

We love cinnamon at DUPIsCHAI for its health benefits, great taste and ability to substitute for sugar as an all natural sweet spice. Cinnamon is the second ingredient in our Arise Chai, third in Elevate and Fortify, for all the above mentioned benefits. Learn more about our Power of Spice Chai.

10. Chericoni et al. In vitro activity of the essential oil of Cinnamomum zeylanicum and eugenol in peroxynitrite-induced oxidative processes. Journal of Agricultural and Food Chemistry. 2005. https://www.ncbi.nlm.nih.gov/pubmed/15941312/