Green tea is made from Camellia sinensis plant leaves that have not undergone the same withering and oxidation process used to make black teas. Green tea originated in China, but its production and manufacturing has spread to many other countries in Asia.

Several varieties of green tea exist, which differ substantially based on the variety fo C. sinensis  used, growing conditions, horticultural methods, production processing, and time of harvest. Here, we will focus on the health and wellness benefits of green tea with a particular focus on polyphenols (bioactive ingredients). 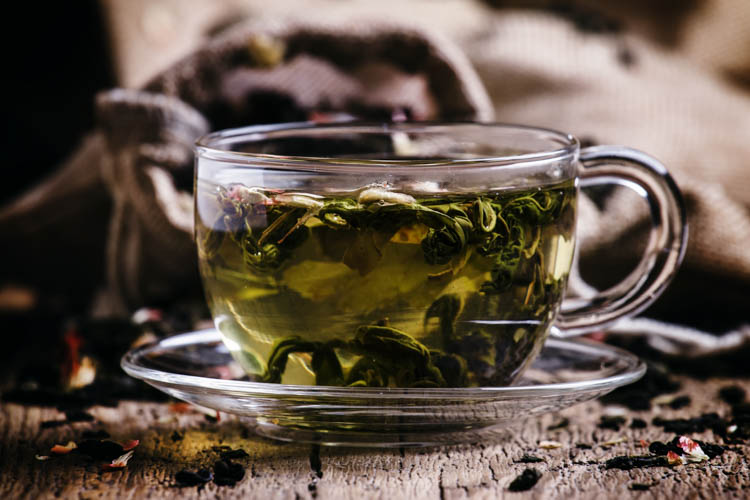 After water, tea is the most frequently consumed beverage worldwide. The tea plant originated in southwest of China and as early as 4000-5000 years ago the Chinese people had become aware that tea could promote health and prevent some human diseases. The tea industry in China was developed during the Tang dynasty (small plantations before A.D. 581; with growth during A.D. 581-618) and underwent rapid growth under the Song dynasty (A.D. 960-1279) likely due to the health-promoting effects of tea. Tea had become a necessity of life for all citizens, from high officials, the intelligentsia, and down to the common people. [1]

From there on tea was spread around the wold. Today, tea is planed in 60 countries, and people from more than 160 countries have formed the habit of tea drinking. The acceptance for tea by people from different countries and different ethnic groups are by and largely related to its beneficial effects on health. [1]

Traditional Chinese medicine wisdom started to be embraced by modern medicine in the 1980s. This is also the time a general spirit of “returning to nature”, started research on the effective components of tea that might prevent or control many important diseases. [1]

Over the past decade many scientific and medical studies have focused on green tea for its long-purported health benefits. There is convincing evidence that tea is a cup of life. It has multiple preventive and therapeutic effects. [11]

Tea is an important dietary source of polyphenolics, particularly flavonoids. More than 4000 of these flavonoids have been identified and widely distributed amongst plants. The chemical composition of tea includes polyphenols, alkaoids (caffeine and theobromine), amino acids (mainly L-theanine), carbohydrates, proteins, chlorophyll, volatile compounds, minerals (aluminum, manganese and fluoride) and other unidentified compounds (currently being discovered and/or researched by scientists).[3]

Many of these compounds are also found in other natural whole foods but, we simply don’t eat enough quantity to reap the benefits. An easier way is to drink a few cups of tea throughout the day and load up on containing bioactive compounds.

Polyphenols are one of the main bioactive compounds in tea, the major one being flavan-2-ols or, catenchins. Tea catechins are major sites for antioxidant reactions and activity, and stabilize free radicals (ROS). Tea polyphenols prevent the formation of reactive oxygen spices (ROS) and are strong metal ion chelators. [11]

Popular and studied catechins (flavan-2-ols) in green tea include:

A point to note is that after drinking tea only a certain percentage of the polyphenols are absorbed, with those appearing in the blood and tissues considered bioavailable the rest are discarded as waste product. [5] Henceforth, the research shows tea consumption is directly related to health benefits, the more tea consumed, the more heath benefits noted.

Green tea and its major components, such as tea polyphenols, catechins and caffeine administered through drinking water or diet have been demonstrated to inhibit tumorigenesis in many animal models for different organ sites, including the lung, oral cavity, esophagus, stomach, small intestine, colon, skin, liver, pancreas, bladder, prostate, and mammary glands.[1]

Overall, cancer prevention by tea and tea components has been studied in many different animal models of carcinogenesis. In a review of 147 papers published up to December 2008, 133 described cancer-prevention or inhibitory effects. [5]

Obesity is now recognized as a rapidly increasing worldwide threat to health, and many studies have been conducted to examine the influence of tea drinking on weight loss and metabolic syndrome in animals.

In the 26 human experiments conducted, most investigations discovered that tea could reduce BW. [6,7] Epidemiological evidence has shown that habitual tea consumption of an average 434ml/d (approximately 2 cups) for 10 y is associated with a lower percentage body fat and waist circumference than no tea drinking. The scientists did note that there is lack of relevant studies and data to make major conclusions on the topic. Furthermore, ingestion of tea components along with caffeine did provide some change in BW but not likely clinically relevant and more data is needed to make conclusive assessment. [6]

In addition to the phytochemicals, green tea naturally contains caffeine. The use of caffeine may also contribute to changes in BW measure through increased energy expenditure, or increased thermogenesis. Because of caffeine’s independent effects, the combination fo green tea catechins with caffeine may be able to provide additive or even synergistic benefits over catechins alone. [6,7]

One mechanism by which tea assists with weight loss is by inhibiting gastrointestinal tract enzymes like pancreatic lipase, amylase, and glucosidase. Tea polyphenols are involved in this process of inhibiting these enzymes, thus lowering the rate of absorption of fats and sugars, resulting in reduced caloric intake in the body, decreasing weight-gain. [13]

Another mechanism of tea assistance in weight loss involves short chain fatty acids (SCFA). Tea polyphenols assist with SCFA generation by gut microbiota. These SCFAs are absorbed into the blood stream where they can travel to the liver and enhance energy metabolism AMPK pathway. [13]

Gut health is an important area of study for obesity and weight management. Tea polyphenols are poorly absorbed in the small intestine and pass on to the large intestine where they directly interact with gut microbes, benefiting health in various ways. Gut microbes break down polyphenols into smaller, more bioavailable phenolic components, and conversely, polyphenols modulate gut microbiota communities. [13]

The Ohsaki Study, done on a cohort of over 40,500 persons in Ohsaki, Japan to examine the association between green tea consumption and mortality from CVD, cancer, and all causes. After an exhaustive questionnaire and data analysis the scientists concluded that green tea consumption was inversely associated with mortality from all causes, and the inverse associated was more pronounced in women. [8]

Data at a glance from the study by Kuriyama, Shinichi [8]:

In Japan, the rate of cigarette smoking is still very high at 32.7% in 2001. But, compared to the West their rate of CVD is lower. Hence, many cancer and CVD studies are done on Japanese population. A study comprised of 203 patients who underwent cardio surgery due to a variety of factors was done. Based on the data collected scientists concluded, the ingestion of green tea was found to be associated with a lower incidence in Coronary Artery Disease (CAD) in the population of Japan. As a result, the higher the green tea intake, the less likely CAD is to develop. [10]

Loss of cognitive function due to the structure and function damage of neuronal cells is a common process in neurodegenerative diseases including Alzheimer’s disease (AD), Parkinson’s disease (PD), and Huntington’s disease (HD). In ND the main area affected is in the brain. Thus, the medicine must have the ability to penetrate the blood-brain barrier, have potent anti-oxidative activity and chelating ability with ions in the brain during the pharmacological control process. Research started in the last century in pursuit of examining tea’s possible influence on the memory and cognitive function of animals and humans.

Daily interaction with pesticides, smoke and pollutants are the most common environmental toxins to the human health and wellbeing. These toxins may impact human health at levels from the molecular (DNA, RNA, or protein) to the systemic (cardiovascular, respiratory and so on). Formation of reactive radicals, lipid peroxidation, inflammation and cancers are just some of the response or mediation to these toxins. The protective effects of tea are collectively mediated by antioxidant, anti-inflammatory, anti-mutagenic, hepato- and neuroprotective, and anti-carcinogenic activities. [12]

Green tea catechins (GTCs) are known to increase the amount of anti-oxidative enzymes in the blood, and function as antioxidants to scavenge ROS such as superoxide, hydrogen peroxide (H2O2), and hydroxyl radicals. Furthermore, GTCs have demonstrated the ability to quench free radicals generated by oxidative environmental toxicants and consequently, reduce toxicant-mediated cellular damage, DNA damage, cancer and apoptosis. [12]

Green tea is rich in powerful and mighty polyphenols, including catechins, that carry numerous health and wellness benefits mentioned above. Furthermore, green tea simply steeped in 245ml of water has the following general nutrition components:[14] [the amount of green tea used was not specified in the research but on average it’s 2g per 245ml of water]

Vitamins and minerals including:

As far as drinking brewed green tea up to 10 cups a day does not show any adverse side effects or drawbacks. In fact, the data seems to be show it is good to drink more and reap the wellness benefits mentioned above. However, there has been findings of unexpected toxicity at high concentrations of green tea polyphenols and catechins. This occurs when tea components are given in large doses to treat medical conditions rather then simply drinking steeped tea. [1]

The tea plant originated in China and today is spread across much of Asia and parts of Africa. Beyond just great taste and cultural rituals, it has been known for centuries that tea promotes health and prevents human diseases. The research into teas medicinal properties in the West was started in the 1980s and continues today. Scientists now confirm the presence of complex polyphenols and the mechanism by which they assist in wellness. From flighting cancers and assisting with weight-loss green tea seems to be an easy, healthy and convenient addition to daily busy lifestyle.

You can enjoy the subtle flavour of green tea in our Fortify Chai along with mighty herb tulsi and a 5 spice bend that includes: cinnamon, ginger, turmeric, fennel and black pepper. Fortify blend is designed with anti-inflammatory and antioxidant properties of the ingredients in mind. Perfect way to wrap-up your evening and assist with deep sleep.